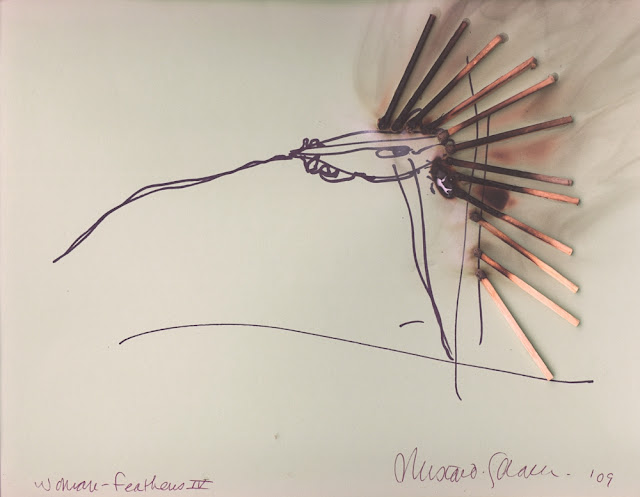 The first thing that comes to mind here is the moment I discovered fire; not in the sense of when as a child I
marveled at the bright flickering flames, or the heat radiating outwards but when playing with a bit of drawing and then touching the paper here and there with the lit match so that the paper would be blackened from the soot, or singed from the heat, and then openly burned. It was more in the discovery that the fascination and excitement that fire seems to hold over children fades with maturity.

I found that I was able to reach deep into my own psyche, and find the remnants of the fascination that playing
with fire held for me. Animals instinctively fear smoke and flames and will flee at the mere presence of fire, but humans are a strange lot. Fire appeals to our emotive levels if not our intellectual ones. My balancing act of burning my drawings, or rather burning with my drawings, was an attempt to explore unfamiliar territory, or at least less familiar than fading memories of my childhood fascination with fire, like most other children.

It is with these assemblages I played with fire.

The act of burning paper, allowing the heat and flames to consume the pulpy substance, with minimal control over the end results, is further excited by the anticipation of how this very automatic writing in smoke and flame will proceed to consume and literally re-compose an artwork as it decomposes it as well. When in the process of drawing some ideas that spill out from the subconscious regions of the mind, there is no real sense of anticipation as to what shall transpire next when flame is put to paper. The act of burning reduces too, the “preciousness” of the drawing by relegating it to the flames. The attachment of the offending matches becomes the protagonist in this drama play. Action art, the quest for truth and reason but in the end a destructive force which reduces itself to a state of grace upon further examination. It is in this mixture of proposing an idea in pencil or ink as an image, with a bit of facile attention to the materials, and then assailed by the natural force of chemistry, nature’s gifts manipulated by man into the most primal technology: fire.