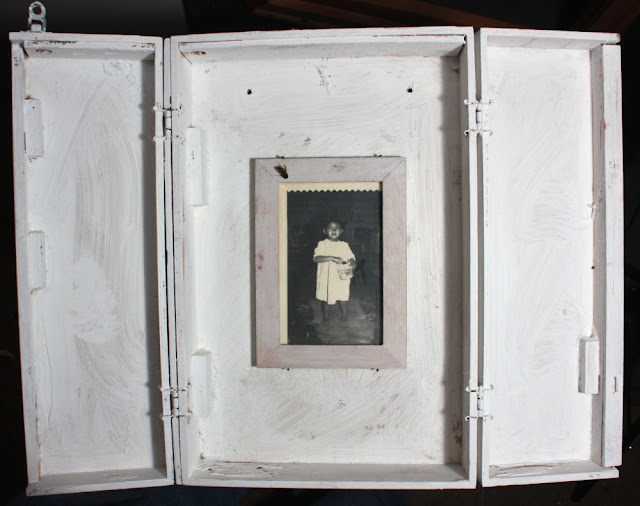 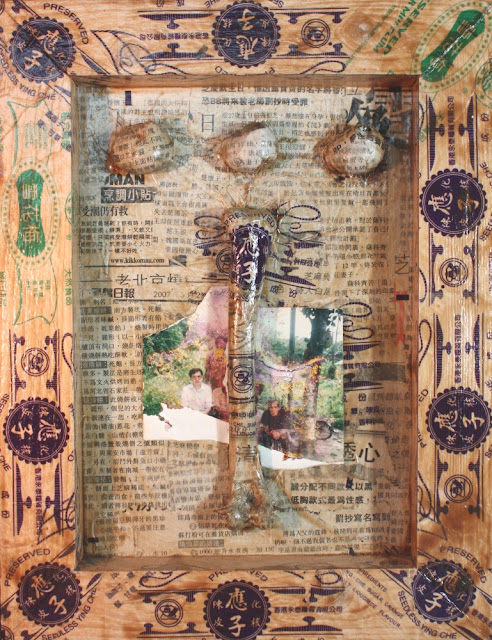 
ARTIST STATEMENT
This work is part of the process of my exploring personal histories through language, image and paint.
My boxes were begun as a way of excavating and archiving my early life.The mixed media pieces, however, are trying to take that process a step further by exploring language and object together as signifiers of memory. Lack of true memories provoke a sense of dislocation, alienation: a feeling compounded by my mixed parentage and eventual repatriation from Malaysia to England - from a post-colonial childhood, in which I was product of both colonizing power and native other.
The work is based around the combined use of paint, text, found objects, and photographic images in attempting to evoke this experience of being between two cultures and belonging to neither...

“Learned gentlemen should build a goodly, huge cabinet, wherein whatsoever the hand of man by exquisite art or engine has made rare in stuff, form or motion; whatsoever singularity, chance, and the shuffle of things hath produced; whatsoever Nature has wrought in things that want life and may be kept; shall be sorted and included.”
~ Francis Bacon

For years I collected all kinds of found objects: printed ephemera, pebbles, shards, buttons, twigs, bones, dried animals - souvenirs of all kinds... every time I moved house, I carted round boxes labelled 'bottles, stones and bones' and suchlike...my 'little objects of desire' were the first things I unpacked to make me feel at home.

During this time i was a painter, and had no particular interest in collage or assemblage.

In the late eighties I read a book by William Gibson, in which he describes a forgery of a Joseph Cornell box, made by a half-mad artificial intelligence out of the detritus of a centuries-old families possessions... the description of this box, with its old lace, fragile bone, and burnt out electronic components, resonated with my collections of objects, and I realised that I had found a way of using and displaying my collections as an art form.

Inspired by Cornell, and Schwitters, these first boxes evolved into the artwork I now make...there is also an element of the wunderkammer about them... I still compulsively collect, but now I have the therapeutic balance of then arranging my finds...creating my own personal histories and taxonomies.

These boxes are, on the whole, small and intimate things, 'Flotsam and Jetsam' being a notable exception; my desire is to assemble things in such a way that the viewer also sees what i see, the beauty that emerges from the juxtaposition of seemingly random natural or man-made elements, and also the element of melancholia, sadness, that is thereby elicited.
Posted by Cecil Touchon at Tuesday, January 24, 2012