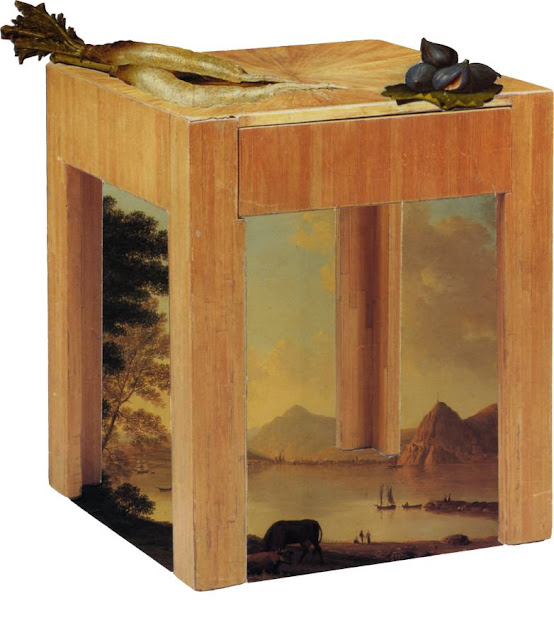 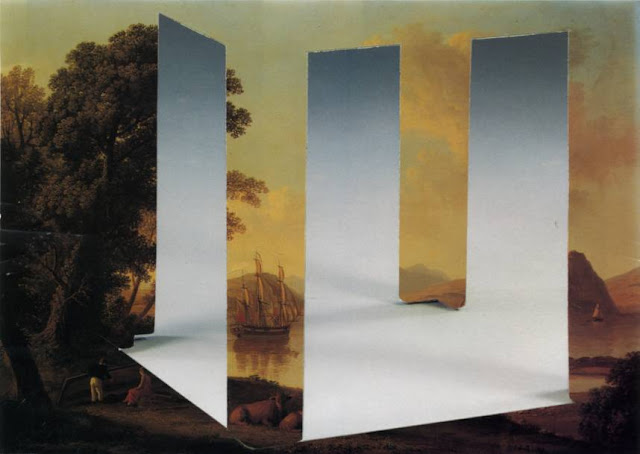 
The history of collage and the history of landscape are not separate. Though segregated by historians and curators, and discussed independently, the respective concepts of collage and landscape have evolved to overlap and share fundamental similarities in process. Both deal with importing, exporting and editing imagery. But more importantly, these two seemingly disconnected words share similar meanings: they both indicate a composite site—albeit an image of land, versus the location of pasted, processed tree pulp (paper) images of anything. Since landscape has evolved to mean any view and collage has evolved to mean anything combined, another connection is through their field relationship and the sources of their materiality. Paper comes from trees and woody fibers. Landscapes come from observed, manipulated or fantasized panorama. These all come from the land—or the mind, which is obviously influenced by experience in worldly settings. The act of making a collage is dependent on bits of land resources, and landscapes are essentially rearranged, “hacked” views of land: both are cuttings. The histories of landscape and collage, which were once distinct, independent histories—long enough to establish each idiom—have been on a collision course since about the middle of the twentieth century. Their forceful union was inevitable. Like tectonic plate shifts, such fusion breaks new ground and causes hybridization as the melding of separate traditions coalesces into new form. “Breaking” is a way of fracturing, which of course is a tactic of both idioms, as each deals with the combination and dispersal of elements.
Landscape and collage practices have dominated my work and my thinking for more than three decades—though only in the last several years did I realize the potential of my dedicated processes to break ground into each other. One aspect of my work is to bring divergent histories together to form hybrid realities—to in effect, collage them—which question assumptions about the meaning or definitions of each. The “Witness Series” was named after a statement made by Rene Magritte. It explores how one tradition outfits the other, while also examining environmental concerns and surreality invoked by consumer ignorance from whence the products of mass consumption come.
Pushed from the earth toward the sun, a tree is an image of certain happiness. To perceive this image, we must be immobile like a tree.  When we are moving, it is the tree that becomes a spectator. It is witness, equally, in the shape of chairs, tables and doors to the more or less agitated spectacle of our life. The tree having become a coffin disappears into the earth.  And when it is transformed into fire, it vanishes into air.
Rene Magritte
I call the series Witness because of current cultural relationships to global land treatment. As, Ursula K. Leguin once wrote, “to understand power is to be aware of the upset when power is used.” Witness because to cut an image from one source leaves a hole in another, and we can see this in the things we consume if we know how to look or take notice. Using images cut out of auction house catalogs of furniture, and pre-nineteenth century landscapes, I cut out the negative space beneath tables and chairs and supplant them in landscape images, and in turn trade the remaining shape of land imagery within the removed space beneath the furniture to obtain a kind of oddly paired diptych displacement—dual images which strike a kind of unusual balance with less waste, but one that is clearly synthetic rather than natural.
Todd Bartel 2005
(Updated, August 2007, Montpelier, VT) Published Hunger Mountain 11, 2007
Posted by Cecil Touchon at Wednesday, January 25, 2012