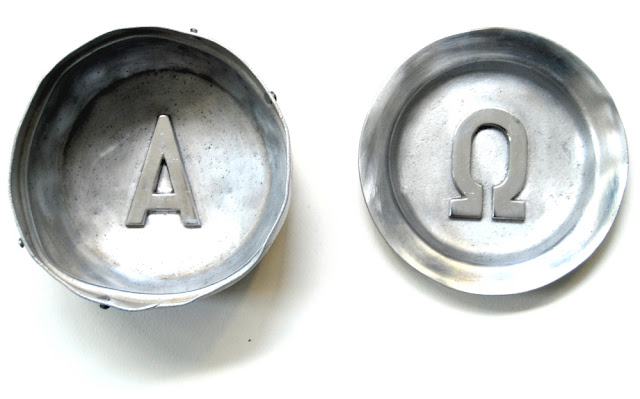 Alpha-Lightning-Omega - 1979
Costis - Athens, Greece
Pewter pot with letters Alpha and Omega attached to the interior of the pot and the lid.
on the bottom is inscribed the letter Alpha, a symbol of lightning, Omega. Signed 'Costis 1979' 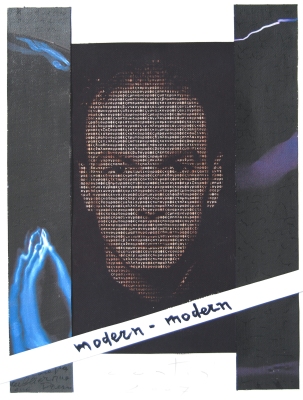 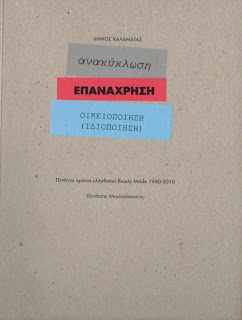 OM.2011.027 - Costis (Greece) Book: 50 Years of Greek Ready-Made
This book/exhibition was first presented at the Municipal Exhibition of Kalamata on December 2010. The text, as well as the exhibition, is trying to establish an overview of recycled/reused elements within Hellenic Art since 1960. This date, more or less, is the birth of the phenomenon among these shores since Greece never experienced simultaneous versions of the historic avant-gardes before the War. Therefore the creative explosions of experimental and provocative movements, especially during the 60s and 70s, tried to catch up and encapsulate both the older and missed movements such as Dada, Surrealism or Cubism and to try to lead parallel ways to the newer avant-gardes such as Fluxus or Nouveau Realisme and, in the same time, explore a more native, local sort of artistic personality. The exhibition/text then moves on to the newer versions of the use of the readymade in greek art in the 80s, 90s and 00s, therefore trying to identify the future of such a creation among the contemporary artistic community.