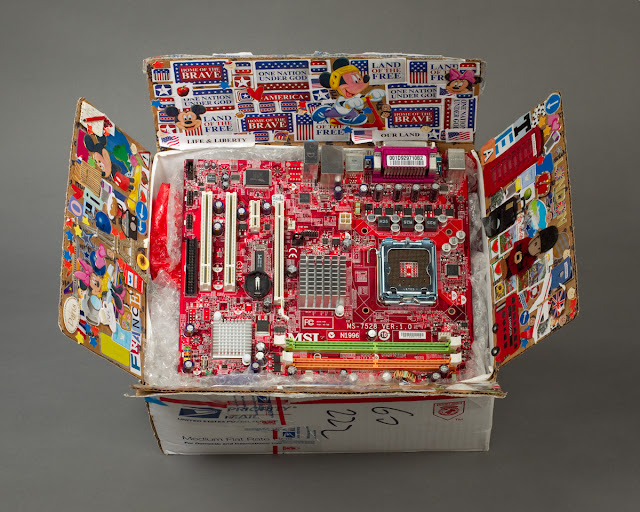 Ms. Levinson explains the origin of this work of art...
In and Out of the Box - Artist Statament

Has a box replaced a bag in your life? Do you find fewer bags to recycle
replaced by multiple boxes sent by mail mostly because of virtual purchases?
If so, join millions whose numbers increase daily. Amazon, for example, sells
everything and often at lower prices which preclude running to the stores to find
an elusive item. The change in this way of buying intrigued the Hera Gallery, a
small innovative gallery, in Wakefield, R.I. They called for artists, to compete in a
national juried exhibit. Each artist had to get a 9”x11”x 6” Priority Mail Box
from the U.S. Postal service to visually interpret the altered way that people
now buy goods. Also an artist statement was required to accompany the piece.
The juror, Dina Deitsch, is a curator at the De Cordova Museum. She selects
and exhibits new edgy art for enjoyment and education of museum goers.
Her choices are often experimental and unique which immediately unnerved
me. But I love a challenge and here was one. Even the wrappings had to be
included for the sake of authentication.
There were numerous ways to approach the box: paint on it, collage the inside
or perhaps make it the art object. How bizarre. It looked utilitarian and plain -
a common box from the post office. But that was the point. Transform it. We all
had to use the exact same size, which was my first obstacle. My Waltham Post
Office plus ones in Newton and Wellesley displayed every size but that one. I
was forced to order from them and learned nine was the minimum number
I could order, but wouldn’t be charged which was the only good part. After I
finished the project, I returned the eight unused ones to my local post office and
they were delighted to receive the extras.
Then the real hard part came…what can I do with it? Somehow, after mulling
over what I believed to be the essence, a single thought meandered through
my mind. There’s only one reason for the omnipresent box-the computer.
The phenomenon is worldwide, growing, relentless. Coming to that conclusion,
I drove to A.C Moore, the mammoth craft store, to purchase stickers from
many countries. Unfortunately, I found that international stickers were not hot
items and I had to settle for the U.S., England and France, which had one good
thing in common-they were all red, white and blue. At least they wouldn’t clash,
but I did so want China or Japan. And another problem surfaced and could not
be ignored. The stickers should cover the four inside flaps but my supply ended
at three. I did what any self respecting grandmother would do, I asked my
granddaughter what occurred to her when she thought of purchases through the
internet.
“That’s easy,” Rachel said, not missing a beat, “it’s transportation”.
“Oh,” I said realizing yet again her superior intelligence. “What a great idea and
I even have some in the house that your sister used.” And I muttered to myself
that somehow I remembered that they were mostly the same colors.
But now the hard part -the item to go into the box and over and under the red
and white bubble wrap.
“I’ve got it,” I thought. I pass a computer repair shop on my daily walk and know
that parts are often discarded and I saw some remnants in a box in the window. I
walked in hopeful some pieces might be available to me so I attempted
to speak to the shop owner and tried to explain the art project. Since his
English was none too fluent and my Chinese was nonexistent, we had a hard
time communicating about this esoteric concept. I pointed to the odds and ends
and he handed me three pieces that I might not have selected, but was totally
appreciative of my good luck, especially because one eight by nine inch piece
was red and more significant fit exactly.
The deadline was nearing. After all, I had lost time having the boxes shipped, but
my entry would arrive in time and I could finally stop obsessing over the box.
One week later I received an email that my work had been accepted. Even if it
hadn’t it would have been a provocative pursuit, but I preferred this conclusion.
The show was engrossing with no two pieces even close to being alike. I loved
being a participant and would do it all over again.